Whenever I watch an interview or read an article where people are expressing views and opinions that are counter to my moral compass (and catch myself judging others’ moral compasses) I am reminded of Jonathan Haidt’s book:The Righteous Mind: Why Good People Are Divided by Politics and Religion. 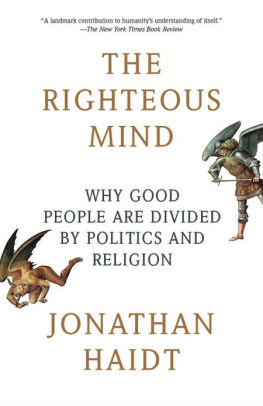 Last autumn through this spring I was part of a UU group of community and parish ministers who met via Zoom video calls to study and discuss the book.

The premise of the book, and our conversations therein, was that humans are highly intuitive beings who act first, and justify later based on our moral predispositions. Regardless of where we are religiously/politically, our beliefs, convictions, and values are far less “rational” than we imagine. But because they are built and supported by our tribal/societal norms, they have the appearance of being rational. This trait is seen beyond politics and religion, as it remains true for all group/class subsets we are part of as we “rationalize” with self-interest based on the preservation of our group and/or our group’s ideals.

Understanding this helps create the kind of empathy that can open doors and build bridges. The other good news, as Haidt concludes, is that: