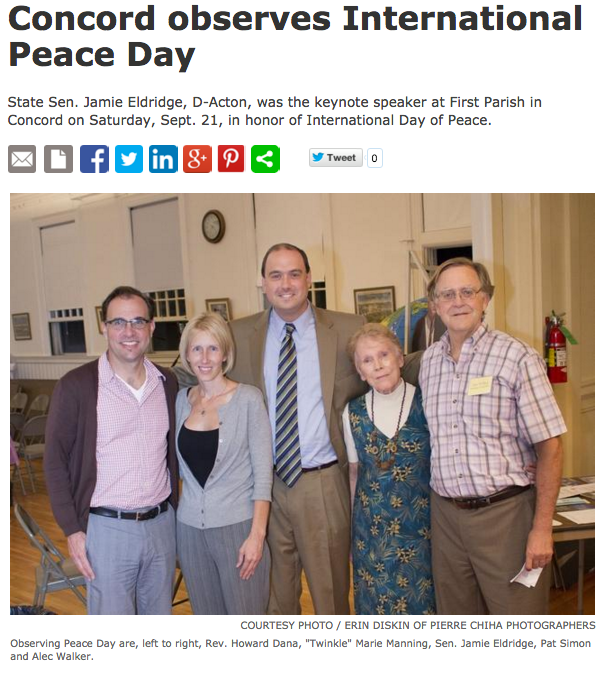 State Sen. Jamie Eldridge, D-Acton, was the keynote speaker at First Parish in Concord on Saturday, Sept. 21, in honor of International Day of Peace.

Each year International Day of Peace is observed around the world on Sept. 21. Established in 1981 by resolution of the United Nations General Assembly to coincide with its opening session, which was held annually on the third Tuesday of September, the first Peace Day was observed in September 1982.

Recognizing this as an opportunity to draw attention to the objectives of peace, by unanimous vote in 2001, the General Assembly adopted another resolution, which established Sept. 21 as an annual day of non-violence and cease-fire. It is day devoted to strengthening the ideals of peace, both within and among all nations and peoples. The observance and celebration of Peace Day is also meant to alleviate tensions and causes of conflict. Around the globe, the day is honored with vigils, workshops, seminars and celebrations as varied as the nations who assemble to celebrate them.

The Concord event opened with the Sacred Dance Guild led by Elaine Sisler. She was joined by three Guild chapters: Sklyloom Dancers, Intimations Dance and CreationDance as part of “One Day One Dance” dance demonstration created by the Peace One Day movement.

Dana, First Parish’s senior minister, led the invocation in a responsive reading by Mahatma Gandhi, a man whose entire life legacy embodies peace. “I chose Gandhi because to be able to see peace as the path to your own liberation is powerful,” Dana said. “Peace to me is cooperation and respect and it has very real and lasting impact on your day to day life.”

The Massachusetts Campaign for a U.S. Department of Peace (MADOP) was represented by three of its members: Simon, founder and state coordinator; Alec Walker, president of the MADOP board; and “Twinkle” Marie Manning, Third Congressional District team leader.

In her remarks, Simon cited Ohio Congressman Dennis Kucinich’s 2001 legislation for peace as well as the recent introduction of H.R. 808, the “Department of Peacebuilding Act of 2013” by California Congresswoman Barbara Lee.

Walker and Manning read together Judy Chicago’s Merger poem that speaks of what the world will be like when peace reigns. About his involvement with Peace Day in Concord, Walker said, “This event made us part of the rising tide of voices for peace.” Manning, advocating for the MADOP initiative, said, “Thanks to the U.N., peace has a fixed date each year on the calendar. Our Campaign asks that Peace have a place at the table. A real voice and a cadre of trained civil servants who see peace as their primary obligation”

Eldridge addressed the audience about S52: An Act Promoting Restorative Justice Practices, which “creates an option for law enforcement and courts to refer juvenile and low-level adult criminal offenders to a community-based restorative justice program in lieu of or alongside other responses.”

Eldridge’s message was that “Restorative Justice is a powerful way to promote peace.”

The Peace Day event concluded with First Parish in Concord’s Unitarian Universalist benediction: “Go out into the world in peace.”