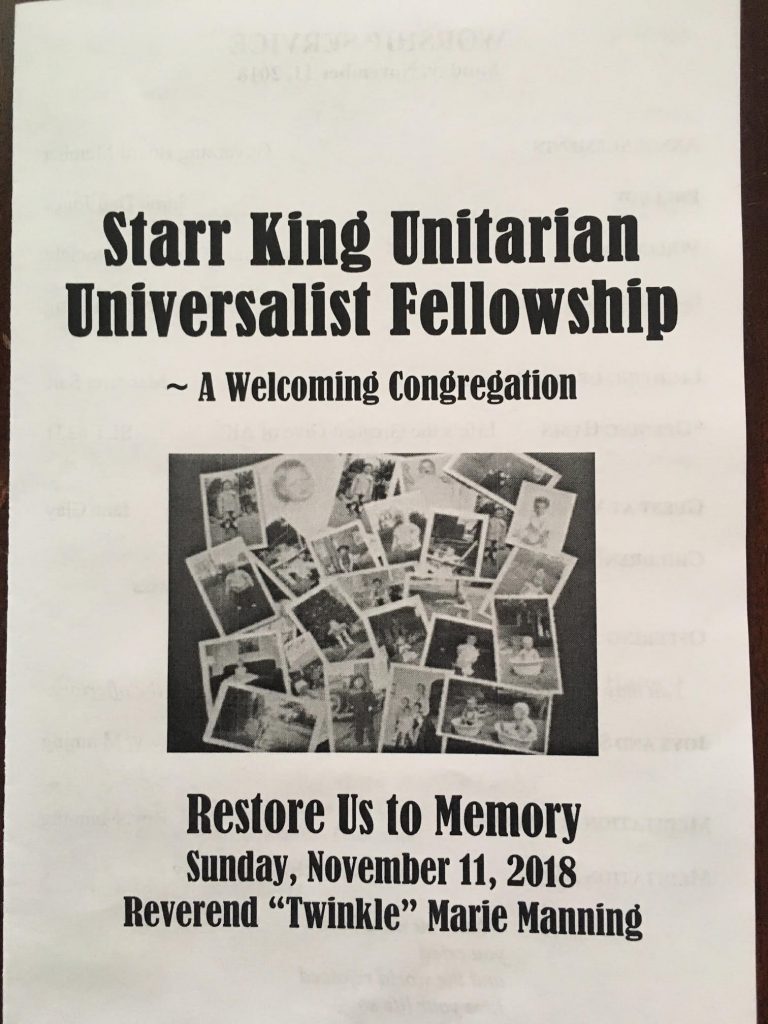 Let turn our attention to the sacred as we consider the words of Poet David Whyte:

“Memory is not just a then, recalled in a now,

the past is never just the past,

memory is a pulse passing through all created life,

a then continually becoming other thens,

all the while creating a continual but almost untouchable now.

Every human life holds the power of this immense inherited pulse,

holds and then supercharges it,

according to the way we inhabit our identities

in the untouchable now.

Memory is an invitation to the source of our life,

to a fuller participation in the now,

to a future about to happen,

but ultimately to a frontier identity  that holds them all at once.

Let us accept this invitation and explore together this Gift of Memory.

Sermon: Restore Us to Memory

was considered one of the most powerful goddesses of her time.

Revered during a time when Memory was of the utmost importance.

At a time long before the written word

was incorporated into language,

in an oral tradition.

Mnemosyne is remembered as being the mother of the nine Muses,

each of which represents what could be summed up as the embodimental elements of the human experience, our expressions of:

The memory of Mnemosyne was all inclusive

— it was the memory of the rules and energies of the universe,

the cycle of life,

the people,  animals  and objects on Earth,

the memory of how to live in the world.

And the world, beyond.

Another revered female figure both Saint and Goddess,

depending on the source: is Bhrigid, or Brigit, Brigid

also closely tied to the arts, poetry and memory.

A prayer-poem dedicated to her conveys how important memories were to those of Celtic origins:

Brigid of the Mantle,  encompass us,

Lady of the Lambs,  protect us,

Keeper of the Hearth,  kindle us.

Beneath your mantle,  gather us,

And restore us to Memory.

Poetic examination of this text indicates the use of “Mantle”

associates the theme with the part of our brain

that plays a large role in the processing of information,

in consciousness, awareness…the creation of memory:

We can conclude that not only is this a beseeching of

being remembered by the Deity,

but also having one’s own mind transformed

to a renewed condition of health

so that the essence of memory is whole.

This kind of desire for memory and remembrance is echoed through many religious sources.

Many believe there is an etheric Keeper of such memories,

or St. Peter at the Gates of the Christian Heaven.

At a human level, We are each other’s Keepers – of Memories

And, we want to share our memories with others.

In our quiet moments;

In our public exchanges;

In our pursuit of understanding the world we reside in

and our purpose in it,

We are affected by each other.

And we want to be remembered as who we know ourselves to be.

For being remembered as who we know ourselves to be

To be understood creates a sense of belonging

Which is an intrinsic human desire,

Cultures around the world for millennia have left evidence

of their desire to preserve Memory.

Pictographs and Petroglyphs in Arizona;

Each provide more than a mere glimpse

at primitive civilizations that once existed;

Often thought of as the mechanism to disseminate

the doctrines of gods

and dogma of humans,

These writings and pictures also give insight

as to what once were their daily lives,

The art portrays the observations of these ancient people,

from documenting celestial representations of the solar cycle

of the natural, and supernatural, worlds.

Some of such, very subjective in its observational nature,

drawing attention to that which must have held significance

yet at that point in history apparently a rare way of illustrating a gestating animal.

by an expedition of archeologists led by Yale Professor John Coleman Darnell, was surprising to the archeologists.

For while Ancient Egyptian Hieroglyphics and art have been widely found throughout that region,

meant to be seen and read from a great distance.

Compared to a modern-day billboard,

the location of these inscriptions show a kind of writing

that until recently was believed to be only used by

the ruling class at that time

and used for bureaucratic purposes.

Yet prominently placed where they were

on what would have been a route well-traveled by the general public,

it indicates that the messages

were readily accessible to the understanding of more than merely

the most privileged of the day.

In archaeological frameworks what this means

is that the clock has been turned back

and the point in time they have long-believed

to the general population is much longer ago.

And while we do not know the artists and scribes by name,

their memory of their time on Earth,    lives on,

grows and expands though these findings.

So it is, too, with the memories we are creating today.

It is not just a recollection of

Memory has a life of its own.

In the current moment.

Drawing on past, present and anticipate future to inform it.

The best way to preserve Long Term Perpetuation of Memory

is to pay attention to it as it is unfolding,

the magical and the mundane moments.

Scientists tell us memories are encoded most strongly

when we are paying attention,

when we are alert,

when we are deeply engaged

and when information is meaningful to us.

Protective measures can be put in place

to better equip us towards the preservation of memory,

For we humans have some obstacles to overcome

when it comes to what we could call “memory thieves.”

interfere with our ability to pay attention and to recall.

Also strip away our mind’s ability

to hold with accuracy recollection of past memories

and encoding of new ones

as those who are in depressed and/or isolated states

are often focused on past events or future worries

and replaying such over and over in their minds

and as such they are not entirely present for current moments.

Experts in the memory field have noted that socialization is another contributing factor to whether or not our memories are strong.

Studies have shown that people with high levels

of social integration have a higher rates of recollection

maintaining muscle strength – muscle memory if you will.

As such interactive, uplifting conversations

are a good workout for our brains.

And while we are considering movement and exercise,

as with the rest of our body that improves its health

with physical activity that increases blood flow including to the brain.

This along with consuming nourish foods aide in the brain’s Neuroplasticity, which helps us to organize information

and be flexible and welcoming of new ideas.

And, today, perhaps more than ever in history…

Chronic Stress is a key component to memory loss.

Similar to Depression, when we are in Chronic Stress mode,

we are not fully present for much of Life’s genuine experiences.

Many of us are overloaded with work,

and the inundation of negative media and news,

which are responded to with increasingly urgent calls to action

addressing multitude of public concerns that we focus on.

are meant to signal our minds to become alert

and our bodies to become activate.

is designed to make sure we can survive in a crisis.

Coming back to a calmer state of Being.

Without extended calm periods, our bodies become flooded with chemicals that result in a loss of brain cells and an inability to form new ones.

This affects our ability to retain information.

It affects our ability to make good decisions.

It affects our quality of life, and the quality of Living we can engage with.

As a people of faith we affirm:

With the rampant media informing us daily, even hourly,

of each impending crisis, locally, globally.

tugging on our bodies, minds and spirits

to contribute all that we are

in gestures of solidarity so that we can make the world new again,

And, we need to rest.

I am not suggesting we set down the mantels of social justice,

for that would be blasphemy

if ever there was such sacrilege to be named

in our creed-less faith tradition 🙂

But what I am suggesting,

And what I am asking     is for you to give yourself permission to rest.

Instead of passing thru Life in a blur of pressings and pressure,

Practice being attentive to Nature, to people,

Notice the light as it shines through your window each morning,

And the stars in the nighttime sky.

Pause    and notice how your lover’s eyes light up

when you enter a room…

Lover’s…. Let your eyes light up when your lover

Take time when they are called for.

Let them flow and accept what that moment offers.

Take a vacation to explore something new…

Visit a sibling UU congregation once in awhile.

It is an opportunity to make connections with those who share

With Sarah Dan as your Music Director

I know I am truly preaching to the choir 😉

And listen to music.

Move as you are able.

All contribute to better memory storage.

All contribute to better Memory Making!

Restore you to memory.

May you take time to rest.

And, may you live your Life so that you rejoice!